Who is Opa Heinrich?

Heinrich  Stiefel, known as ‘Opa Heinrich‘,  is a composer, a lyric writer and a musician. Married for almost 50 years, has three children and five grandchildren. For more than 30 years he has been a producer of valuable teaching and learning materials for schools, kindergartens or nursery schools and parents.

He personifies the ideas and basic values with catchy, encouraging songs to be imprinted in  the hearts and  long-term memories of children, the youth and even parents.

For different foundations like ‘Gmeiner Stiftung’ and ‘Die Wolfgang Bergmann Stiftung’, he has written several songs.

Meanwhile he has already composed more than 100 songs and has released different music CDs. Six music CDs in the English language are now available. All CDs can be downloaded from different Internet portals.

Some Opa Heinrich’s songs have already been marketed and sold on music CDs by companies like Universal Music and EMI alongside prominent music stars like Peter Maffay, Nena, Heino, Rolf Zuckowski, Volker Rosin, Karel Gott and many others. 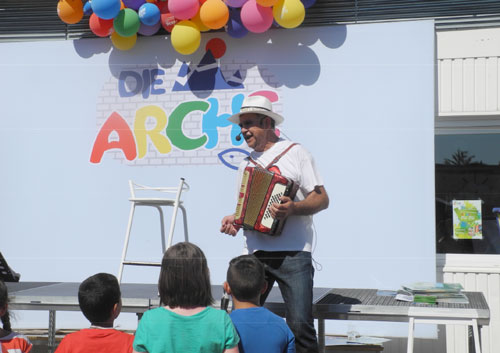 Opa Heinrich live at the “Die Arche” summerfair in Munich, 2014

“All children in this world are our future. Let’s make them strong and loving humans, in mind and body, through our songs and by being kind to one another.“

“Self-confidence and a good character are the foundations of a happy and successful life.“